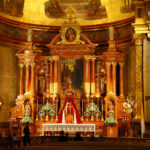 sins, the virtues, and how the virtues counteracted the deadly sins. In recent decades this necessary education seems to have fallen by the wayside. This is an unfortunate development because it is truly important to know. Why? In studying martial arts (or military strategy) we learn that we must be able to both identify the tactics our opponent and our own counters to those actions.

Before we take a look at the virtues, let me expound a bit on our apostolate. 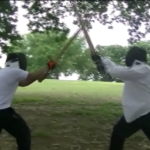 connecting them with the martial tradition of the historic Knightly Orders of the Catholic Church through the study and practice of swordsmanship. We use many medieval and renaissance texts to reconstruct how swords were really used. Through this we connect with our religious heritage while building character, learning more about our faith, and strengthening our values and bodies. A large part of what we do is to teach tactics for physical and spiritual defense. One component of those spiritual tactics are the virtues, both cardinal and theological, which are sometimes referred to as the heavenly or Christian virtues: prudence, justice, temperance, fortitude (courage), faith, hope, and charity.

Now, on to the virtues and how the martial arts system of the Order of Lepanto works to strengthen them.

Prudence— Aristotle defined prudence as recta ratio agibilium, “right reason applied to practice.”  It is the virtue that allows us to judge correctly what is right and what is wrong in any given situation. In the practice of martial arts we use prudence in a couple of ways: first, we learn the extent of our actual abilities and to not take on more opponents than we are able; second, in sparring we must quickly select the appropriate technique for a given situation. Situational prudence in a split-second helps to build our decision making overall.

Justice— As Fr. John A. Hardon notes in his Modern Catholic Dictionary, it is the constant and permanent determination to give everyone his or her rightful due.” We say that “justice is blind” because it should not matter what we think of a particular person. If we owe him a debt, we must repay exactly what we owe. In the area of self-defense and defense of others, we look to stop the unjust aggressor with appropriate force. To exercise justice is to not unduly harm anyone, but to prevent an injustice from occurring.

Fortitude — Fortitude allows us to overcome fear and to remain steady in our will in the face of obstacles, but it is always reasoned and reasonable; the person exercising fortitude does not seek danger for danger’s sake. Prudence and justice are the virtues through which we decide what needs to be done; fortitude gives us the strength to do it. This virtue is often labeled as “courage” and is most associated with the martial arts in general. Courage is the counter to fear and can be bolstered through practiced responses to a given situation, whether spiritual or physical.

Temperance — While fortitude is concerned with the restraint of fear so that we can act, temperance is the restraint of our desires or passions. Food, drink, and sex are all necessary for our survival, individually and as a species; yet, a disordered desire for any of these goods can have disastrous consequences, both physical and moral. In defensive situations people can lose control and let anger fill them. This anger leads to an over-reliance on strength and an abandonment of form and technique, which leads to disaster. The most successful martial artist (in real and simulated fighting) is the one who exercises temperance.

Faith— Faith is the theological virtue by which we believe in God and all that He has said and revealed to us and all that Holy Church proposes for our belief because He is truth itself. By faith “man freely commits his entire self to God.” For this reason the believer seeks to know and do God’s will. While faith is not an integral piece of every martial arts system, you will find that the martial arts of a culture tends to build upon the faith system of that culture. In the Order of Lepanto, we specifically study the martial system of the European Knights from the medieval and renaissance periods because these men were Catholic (and later, Protestant) and the tenets of our faith are part of their system.

Hope— Hope is the theological virtue by which we desire the kingdom of heaven and eternal life as our happiness, placing our trust in Christ’s promises and relying not on our own strength but on the help of the grace of the Holy Spirit. Placing one’s self, or even thinking about placing one’s self, in harm to stop unjust aggression can be a dangerous undertaking. Trusting in the promises of Christ and knowing that His strength and grace are available to you allows the martial artist to freely focus on the defensive situation.

Charity (Love) — Charity is the theological virtue by which we love God above all things for His own sake and our neighbor as ourselves for the love of God. Jesus makes charity the new commandment. Whence Jesus says: “As the Father has loved me, so have I loved you; abide in my love.” Perhaps love and charity is the one virtue we do not always associate martial arts with. But we treat our sparring partners and fellow students with love and charity as we share our knowledge and even as we use sparring to point out weaknesses. Even in dire circumstances we approach our opponent with the intent of causing as little harm as possible, and are prepared to offer forgiveness once the threat itself has been neutralized.

While using martial arts to better learn and practice the virtues is not exactly commonplace, it is a valid approach for some. The Order of Lepanto has invested its efforts to assist men in improving their ability to defend others both physically and spiritually, to help our members grow in faith as they grow in martial arts, and to be steeped in knowledge and love of the Catholic faith.