In the Gospel message for January 30th, we read from the Gospel of Mark, chapter 4 verses 1 through 20. Part of which follows:

On another occasion, Jesus began to teach by the sea.
A very large crowd gathered around him
so that he got into a boat on the sea and sat down.
And the whole crowd was beside the sea on land.
And he taught them at length in parables,
and in the course of his instruction he said to them,
“Hear this!  A sower went out to sow.
And as he sowed, some seed fell on the path,
and the birds came and ate it up.
Other seed fell on rocky ground where it had little soil.
It sprang up at once because the soil was not deep.
And when the sun rose, it was scorched and it withered for lack of roots.
Some seed fell among thorns, and the thorns grew up and choked it
and it produced no grain.
And some seed fell on rich soil and produced fruit.
It came up and grew and yielded thirty, sixty, and a hundredfold.”
He added, “Whoever has ears to hear ought to hear.”

I know that I have heard this reading many times in Mass and read it many other times, and I have always thought about it in regards to my overall receptivity to God. Today though, I had a couple of new ideas about how this parable relates to me.

The first new idea I had is that I really am not some unified block when it comes to the word of God. There are some teachings that I 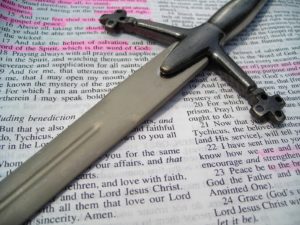 am naturally more receptive to than others. I have, and suspect many of us do, a mixture of good soil, shallow soil, and rocky ground. It occurs to me that I need to discern how I can turn those areas that are barren in my life into more fertile ground for God’s word.

The second new thing that occurred to me is to change my place in the parable. Because Jesus says that the seeds are the word of God, it is typical to think of the sower as being God. Obviously, that is true, but like many parables, there are different layers of meaning. When we evangelize, are we not spreading the word of God? Of course we are! That means that sometimes we are the sower in addition to being the soil. Look how the sowers sows – he or she does not look only for soil that is good and receptive. This person is sowing rather indiscriminately. Do we evangelize in a similar way? Not necessarily with words, of course, but even through our actions. The way we deal with situations that come up in everyday life can be a strong witness to our faith. We might be surprised by finding fertile soil where we expected only rocks.